I’m thinking about all the Thanksgivings when my uncle would proudly declare, “Every day is Thanksgiving!” In my family- Thanksgiving is sacred. We didn’t always make turkey. We were always together. Sometimes we were fasting. Other times we were flying kites, lighting fireworks, or seeing movies. I remember being taught that ‘you should be thankful everyday’. We were.

I’m thinking about the Thanksgivings with my college roommate, Rabbit and her family. We would stuff our faces and eat outside in sunny November weather in Arizona. We would watch football and nap. We would go shopping at midnight and have breakfast before the sun came up.

I’m thinking about the Thanksgivings spent eating store bought dinners. Sometimes in hotel rooms with my dad during soccer tournaments. Other times in my friends apartment while dancing around to YouTube videos in my sweatpants.

I’m thinking about Thanksgiving 2008, when my sister, close friend and myself drove to Dallas from Phoenix, acquiring two speeding tickets in one night out in west Texas. The police officer said to us, “You hit a deer going 96 in this tin can, and you’re dead.”

I’m thinking about Thanksgiving 2011, when Albert and Edwin hiked the Grand Canyon with a pie and a can of baked beans during our first few months of employment. We spent the night in Albuquerque and hiked in the snow. I’m thinking about my only Thanksgiving in Louisiana, when we had a pot luck and fried a turkey by the pool. I made stuffing and baked brie.

Let us not forget last year’s Thanksgiving, as it is the last time I was home and saw my family. It has been my first and only trip back to the US since moving abroad. We made this video while frying turkeys, perhaps you’ve seen  it.

I’m thinking about all these things as I sit at work surrounded by the bustle of another busy day in the oilfield. It’s sunny outside, like Arizona. I feel cold inside, like New Mexico. I’m thinking about how much Thanksgiving really means to me. It’s a time I’ve always been surrounded by family and friends. It’s a time I’ve always been home- that dynamic place.

This is the first year that Thanksgiving is just a day. The truth is, any day is Thanksgiving. I’m thankful for them all.

While this blog is typically written with names changed to protect the innocent, the below post has been a major source of pride for myself and my company here in Qatar. This is a write up which we published on our “Whataberger” internal blog. Please enjoy.

On November 15th and 16th, to mark International Day on Diabetes, Maersk Oil Qatar (MOQ) and Qatar Petroleum (QP) have launched annual 2014 MOQP Challenge- Action on Diabetes. 30 teams associated predominantly with oil and gas sector as well as health care, competed against each other over 2 exciting days and 5 stages in Fuwerit- the beautiful Qatari coastline. A Schlumberger team has been participating in the MOQP Challenge since its inception in 2012.

The Maersk Oil and QP Challenge is a unique event here in Qatar, and much like the challenge stages, the event organization itself contains many layers. On the surface, it is a physical challenge between competitors and clients within a tough industry. Though on closer look, it is an event which not only raised $110,000 for Action on Diabetes, but also raised awareness about the issue, specifically in Qatar. Surrounded by the desert landscape, with diabetes awareness focused on Qatar, and general health consciousness weaved neatly into the competition, those participating are overwhelmed with a sense of purpose and connection to the community. They are also overwhelmed with the adrenaline to compete! To win the event, teams had to combine mental agility, strong physical endurance and great team work over five stages spanning two days. 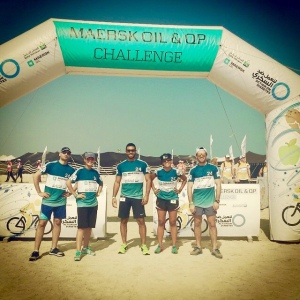 This year’s Schlumberger team, The Blue Expendables II were captained by Bibi Meredova (D&M) and included Florian Lacambra (CPL), Laila El-Ashmawy, Medhat Ayman Rezk, and Johnny Bassil ( WL). These five Schlumbergians, embarked on the journey and hoped to make their company proud by meeting their geomarket manager’s goal of finishing in the top 10 places. Each team member threw in their own personal goals:

I want to be better than last year.

We should just enjoy it.

How about we enjoy the winning! 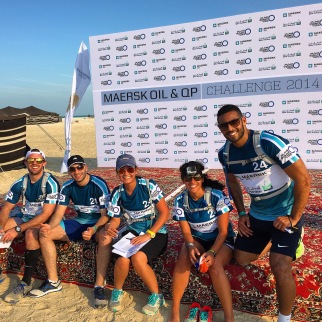 Each of the five stages in the competition was themed around diabetes and healthy life choices. The first stage involved using GPS and running through the desert and making different “fruit and vegetable” combinations to earn points. After a intensive first run stage, Schlumberger team stood in 4th place behind Maersk and QP teams. The second stage of the challenge involved constructing a chariot which held a team member holding a “coke bomb” and raced on a 2 km sandy desert track. The second stage of the challenge also introduced a “Health Booster” facet which was played in parallel to the main challenge. After the second stage, The Blue Expendables ranked 13th. The third stage in the competition was an evening challenge, navigating the desert by GPS in the dark to timed stations and answering trivia questions related to diabetes and Qatar. The team went to sleep ranking 12th. 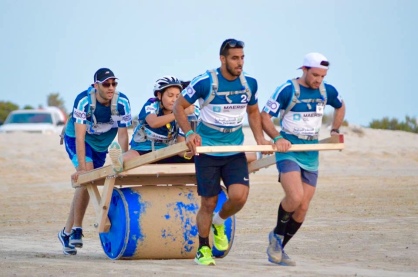 The following morning with the physically intensive fourth stage at the helm, the team was united to play the wildcard, which would triple any points collected from the “Health Booster” during the stage. This one is for all the marbles, the team decided. The fourth stage involved mountain biking, kayaking, and running as a team to burn calories and earn points. With each member playing their strengths, the team mountain biked 15 kilometers, ran 20 kilometers, and kayaked 9 kilometers. Paying no attention to the score sheet, they trudged into the fifth and final stage, where they kayaked to collect pieces for construction of a slingshot, mountain biked to collect ammunition for the slingshot, and finally had to launch the ammunition to knock down a target. After hitting the target and two extra points in a basket, the team finished an obstacle course, concluding the competition.

Upon the end of the final stage, Schlumberger still had no update of their position from the previous night, ranking 12th overall. Although anxious, a hope to deliver better result was still high, (previous years SLB teams ended the challenge 13th and 15th). Returning outside of top 10 was non-negotiable. The Expendables stood together for the closing assembly, given by Mr. Lewis Affleck, Managing Director of Maersk Oil Qatar. He presented Mr Abdulla Al-Hamaq, Executive director of the Qatar Diabetes Association with a giant $110,000 check which was raised by the event, reminding everyone what brought them to this challenge. After three nominations for Best Qatari Team, Best Team with accumulative 200 years of age, Best Team Spirit and Best Male team, Mr. Affleck pronounced the Overall Winning Team

… and the winner of this year’s challenge is Team 24: Schlumberger- The Blue Expendables

Shocked and caught totally off guard, Bibi, Flo, Laila, Medhat and Johnny all leapt into the air, turned and hugged each other. Grins of incredulous joy consumed their faces as they stood on the stage in front of their peers in the industry who cheered on. Representing Schlumberger stood a team of friends and colleagues alike. 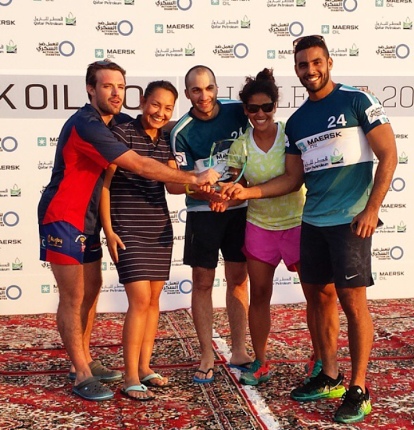 This is how online newspaper Qatar is Booming (http://www.qatarisbooming.com/article/maersk-oil-and-qatar-petroleum-challenge-2014-hailed-huge-success-110000-raised ),has described the event: “After two days of intense competition, Schlumberger’s, ‘The Blue Expendables’ team were crowned the overall winners of this year’s desert challenge with the highest number of Health Points, beating off stiff competition from Maersk Oil Qatar’s, ‘The Navigators’, who won the ‘Best Male Team’ and Texas A&M University Qatar team, ‘The TAMUQ’ who won the ‘Best Team Spirit’ category.”

The money raised will be allocated to fund the Al Bawasil Camp, which hosts diabetic children from Qatar and the region.