Each of the following events deserves its own blog post; however, I’ve been so busy riding the fun train every day to take a moment and capture the events in writing. This is partly due to sheer neglect to my blog, but also because writing this blog has always been a part of my working life (I mean… it’s called ‘rigtales’), and I’m actively distancing myself from that period. Anyhow, let’s recap the last 20 days in all their glory.

May 1- My mother receives an award as a 2015 Piper Professor. Ten professors every year are named in the state of Texas. My sister, dad and my dad’s best friend from Egypt, and myself went to her reception at her college. She was radiant and brightly dressed. She gave an interactive and emotional acceptance speech, during which she, my sister and I all cried. Afterwards, we went to dinner. This is one of the many events I would have been missing if I was still working. It’s a privilege to be with my family.

The week leading up to Friday, May 8–  This event needs some context.  Both my grandparents on my mother’s side are M.D Ph.D. doctors. They moved to the Dallas area so my grandmother could conduct research at the Southwestern Medical Center and work at the hospital/school. (Details are fuzzy, I just know legend has it she was the greatest doctor in all of the land). My grandfather was an Ears/Nose/Throat doctor and later the chief pathologist at the hospital in Henderson, TX.  Now…. My sister is in medical school concurrently with doing research and getting her doctorate also at Southwestern Medical Center. She has finally reached a milestone in her program where she will be presenting her Ph.D defense on May 8. Her research is in lung cancer treatment and something else about growing cell cultures in the lab. (I’m no doctor).This is no joke and no one understands why she would go through all that school and pain and suffering…. well, someone understands. 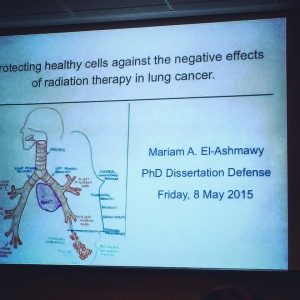 While my grandmother is no longer living, my grandfather, albeit mobility issues, has a vested and specific interest in my sister’s schooling. Most of our conversations are about my sister’s research, health and friends. He always concludes the conversations with praises and prayers for her. Without leaving any room for interpretation here: my sister is indisputably my grandfather’s favorite. This man leaves his bedroom to go to his kitchen on a weekly basis and has not been to a wedding or important family members life event in about a decade. Yet, for weeks leading up to May 8th, my grandfather has been adamant in voicing his intentions to witness her PhD defense. And so, I drove to East Texas on the preceding Wednesday to find my grandpa ready and excited to sit in the car with me for over two hours in the first part of the journey. For two hours, he questioned my directions and insulted my engineering abilities, saying, “You may be a Civil Engineer, but you don’t know where the highways go” or “Girl! Where are you going!!”, and my favorite, “Call your mom and ask her how to get there!!”. It was a little frustrating to diffuse his anxiety and keep driving. My grandpa stayed with us for a few days and he attended my sister’s PhD defense. He stayed out all day and even went out to dinner with the whole family in the evening. Again, I found myself grinning and shaking my head thinking, “I can’t believe I almost missed this.”

May 14th– A few weeks ago, I got a new car. I’m now rolling in a VW Tiguan! As such, we called upon, once more, our trusty friend Craigslist to sell the Rav4. As the inquiries poured in, the car was eventually sold to a young Afghani family who recently moved to the USA and are getting on their feet with finding jobs and raising their two young girls in another new place. The US is their third country to live in since leaving Afghanistan. What was supposed to be a quick and dirty car sale turned into the meeting of two immigrant families. We exchanged contact information and on this day, we’re finally going to go have some fun exploring Dallas! I took the woman and her two girls to the Dallas Zoo. I was totally impressed by these little darlings who were the only 3 and 5 year olds in the zoo without a stroller. They looked at animals, played in the kids fountain, and took pictures with all the animal statues. After the zoo, we met my sister at Spaghetti Warehouse in Downtown Dallas. The woman said to me, “This is the first time in this country I am sitting down at a restaurant.” We made plans to have other outings and I showed her different summer camps and programs for her kids this year. 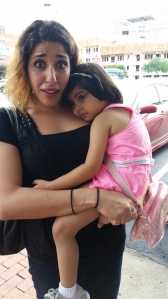 May 15th– My cousin Orpheus, his sons Zorro and Legume (you may remember O and Z from this post.), and wife came to town for his sister in law’s Master’s commencement. I met them at the Dallas World Aquarium. We had a day. We had a great day.

May 16th- The Bird Mart. Again, some readers may remember a few years ago the post about Sand Reclamation . My father’s life time hobby is breeding little birds. Lately, he is liquidating all his stock and supplies and bowing out of the bird business. A few times a year, there is a “Bird Show”, which is like a trade show for bird breeders and bird supplies. My dad and I packed up my Tiguan with some cages and birds, and drove 90 miles southwest to this spring’s, Bird Mart. Before the show opened to the public, my father had sold half his birds to other breeders, who apparently wait for him to arrive. My dad casually leaned over to me and said, “I have the best birds”. It seemed true. My dad’s alter ego lives in the bird breeding business. He is like a different person. Mid way through our day, he leaned over again and said, “I have never seen an attractive woman in the bird business. It’s all old women and gay men.”……”and me”. 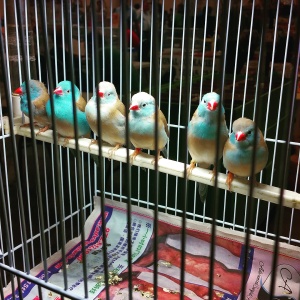 The evening of May 16th, I went to see a friend sing in her band at a pub in Dallas. Seeing my childhood neighbor up on the stage singing and working the crowd made my heart so happy. Again, I thought to myself about all the things you simply don’t get to see when you move away from home.

May 17th–  My best friend and I went to Scarborough Fair with her little niece. There’s no way to capture the magic of this day…. but here are some quotes from little 4 year old Norbet: 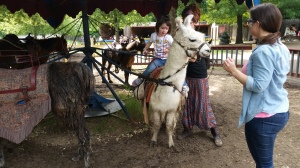 “I have always wanted to come here and see what it was like” — On the drive to the fair, describing the other side of the highway

She was simply enchanted by the characters, who would talk to her and play as we walked through the park. One woman sang and gave her a little ribbon bracelet. For the remainder of the day, Norbet would say, “I want to go see the pretty lady. She sang so beautifully”. At one point in the day, we walked past the games. Renaissance festivals always have a Tomato Toss game, where you are given some tomato halves and attempt to hit a man behind a wooden board with holes cut out for his head and hands. The target man then insults and heckles the thrower and passers-by. Norbet just wanted to throw tomatos. They let her get very close to the wooden target board. As the man in the target saw her, he yelled at us, “Really? What do you want me to say to her?? She has butterflies on her shirt….. You make me want to settle down and have a family!!!”

We all got our faces painted. As I drove home singing in my car, I again thought, I’ve really been missing days like this.

May 20th– Is tomorrow. I will be travelling with my favorite engineer and badass friend, Francis. (Also mentioned in this post from 2011). We are going to Thailand for 2 weeks. My backpack is ready and I’m excited to keep this fun train rolling.